I most definitely won’t be having any more children and can’t quite believe I was pregnant four times! Three of those in the space of four years. Pregnancy is a funny thing, it seems to last forever at the time, but once the baby arrives you forget so quickly. With my first baby the time went incredibly slowly, especially those first 12 weeks. I was so worried about something going wrong, then with no other children to take my mind of things, the whole pregnancy very much dragged along. We had a 4D Scan with Zak as I just couldn’t wait to see him. I remember we had to go twice as the first time he just wouldn’t get in a good position, and wouldn’t move so we could see him, but the second time was perfect. We left the scanning centre with a beautiful picture that I then spent many hours staring at counting down the days to meet my little boy.

Even the last few days of my pregnancy with Zak were slow, I was in labour for THREE whole days…it was horrific..but again you immediately forget once the baby arrives. Although I did find each time that as soon as the labour pains started all the memories can flooding back to me. I suppose it has to be like that or people wouldn’t have more than one baby!

My second pregnancy passed by a little more quickly, but the third time definitely dragged. It was such hard work being heavily pregnant with a 2 and 1 year old to look after at the same time. I remember spending many a morning with all the cushions off the sofa so the living room resembled a soft play centre, watching them bounce around, desperate to tire them out.

We ended up having some extra scan with baby number 3 as my 12 week scan measurments said she had a very small head ( but normal sized everywhere else ) so I wanted reassurance in between my 12 and 20 week scans that there was nothing major wrong. I also had an early pregnancy scan with as well as I was worried before the 12 week scan.

I think it’s fantastic that extra scans are available these days. There’s nothing worse than worrying needlessly and I know my extra scans gave me a lot of reassurance and saved a huge amount of stress which would’ve been bad for both me and the baby. 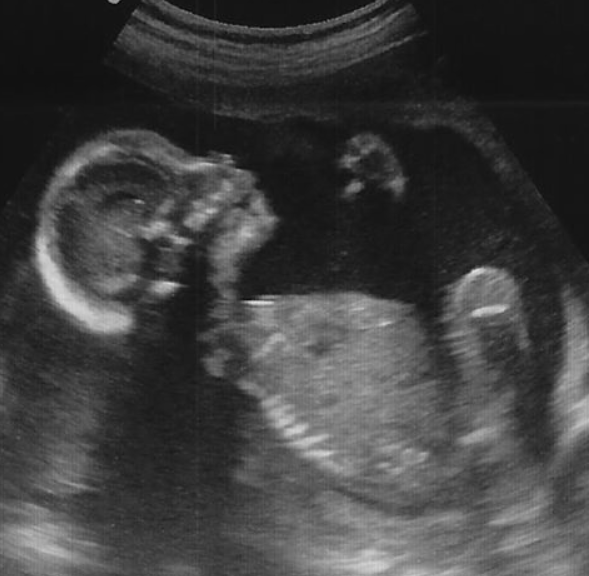 You’d have thought I’d have been super chilled out by number four, but with Charlie his result for the triple test was worrisome so we ended up having the harmony test with him. It was quite a stressful time, but worth the expense for the reassurance that everything was ok.

I’ve been very lucky with all my births that they’ve been straightforward, and I haven’t needed anything more than gas and air (although I try to forget about the end of Charlie’s birth when the canister was suddenly empty ).

Did you have any extra scans or a 3 or 4D scan?