Home » Do you have an irrational fear?

Do you have unusual fear? If so you’re not alone. Did you know that according to a survey run by Benenden, 61% of people have some kind of uncommon phobia or fear with a staggering 57% of people avoiding situations where they could have to face their fear. 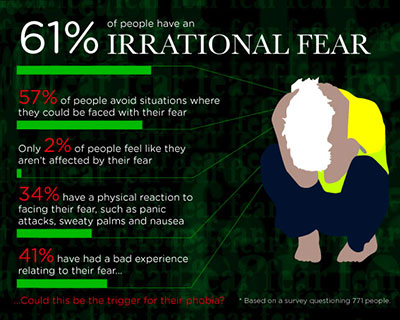 I wouldn’t say I have a fear as such, but I am very squeamish with necks. I can’t stand to have anyone touch or even worse squeeze the front of my neck. My lovely family once all put pegs on their neck in front of me and even the thought of that now, years later, makes me want to throw up.

I also faint when the optician tries to turn my eyelids inside out when I get my contact lenses checked, and while I can make myself go to the appointment, I do worry about it a LOT before hand. I wouldn’t say those fears affect my life as such, but they do cause me some degree of stress in certain situations.

My 4 year old is currently terrified of spiders, there was a tiny little one in the bathroom last week and she was almost hysterical. I don’t know where the fear has come from as she hasn’t, to the best of my knowledge had a bad experience with a spider, although I wouldn’t pick up a big spider myself so perhaps she has picked up something from that.

I asked a few friends if they had any irrational fears and was quite surprised at how many did. One was afraid of buttons and won’t wear anything with them on, another has a fear of sharks, someone else is scared of velvet and another parking in new places. Caterpillars, holes and reverse parking were also mentioned.

As someone who has a few irrational fears, not all mentioned above, I find it quite comforting that I’m not alone.

What are the most common fears?

According to the research carried out by Benenden, the most common irrational fears  are clowns, holes and being without mobile phone coverage. I kind of get the clown thing and certainly wouldn’t go out of my way to see one and I can see that being without a mobile phone when you’re used to being so connected all the time could be worrying also.

18% of people hide their fear, which seems a lot, but it’s good to know the other 82% can talk about their fear with others, and some things are much easier to share aren’t they?

89% of people have never sought treatment for their fear which is quite worrying when there are treatments for phobias available.

How do fears affect us?

Only 2 % of people said their fear didn’t affect their life, which means for 98% of people with a fear, that fear affects their day to day life. Can you imagine being faced with panic attack inducing fear on a daily, weekly or even monthly basis?

What do you think of this research? Do you have an irrational fear or phobia? Does it affect your daily life?