My little Z has been desperate for a Nintendo 3DS for a long time. He even made one from some bits of paper a few months ago. You can only imagine his delight when we were not only sent a DS but two games as well.

The Nintendo 3DS itself was much smaller and smarter than I expected. There is also an XL version available which I think would be even better.

As soon as I saw Wappy Dog I knew Z and S would love it. You can either play with Wappy ( using the 3DS to talk to him ) or you can move him into the 3DS to play when away from home. 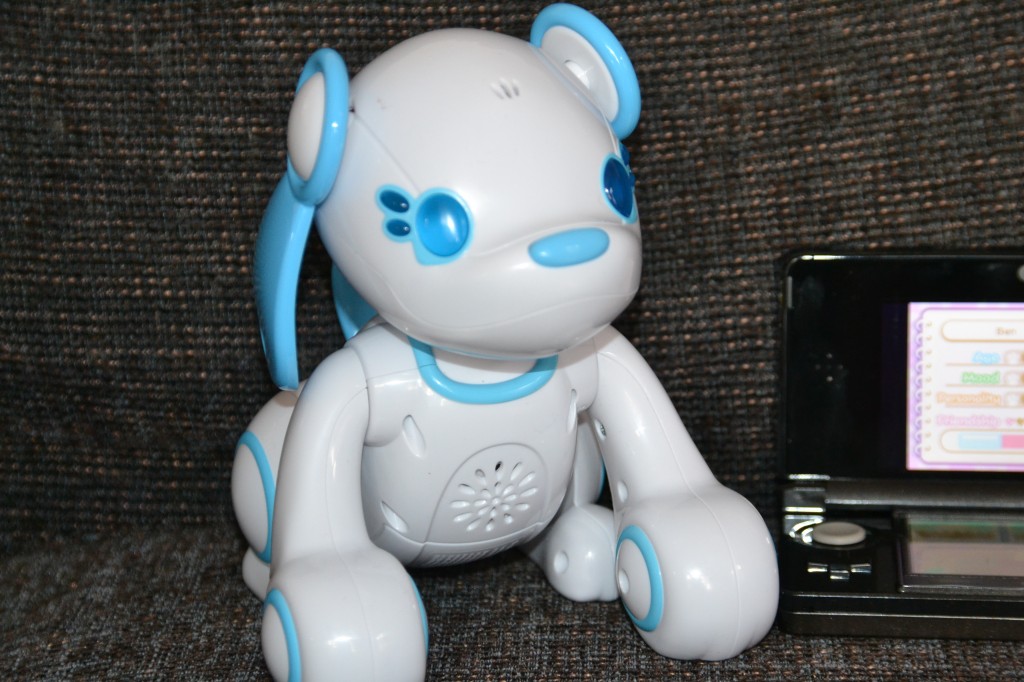 Wappy can be trained to do tricks as well as sing and dance and as you play the game he develops his own personality, relying on you to look after him. S especially loved that his cheeks changed colour depending on his emotions

In home mode, you use the 3DS with the Wappy toy. Wappy needs to be within 3 feet to work properly.  A special screen in the game tells you how Wappy is feeling and what his needs are, so you know whether to feed, play or sing with him. 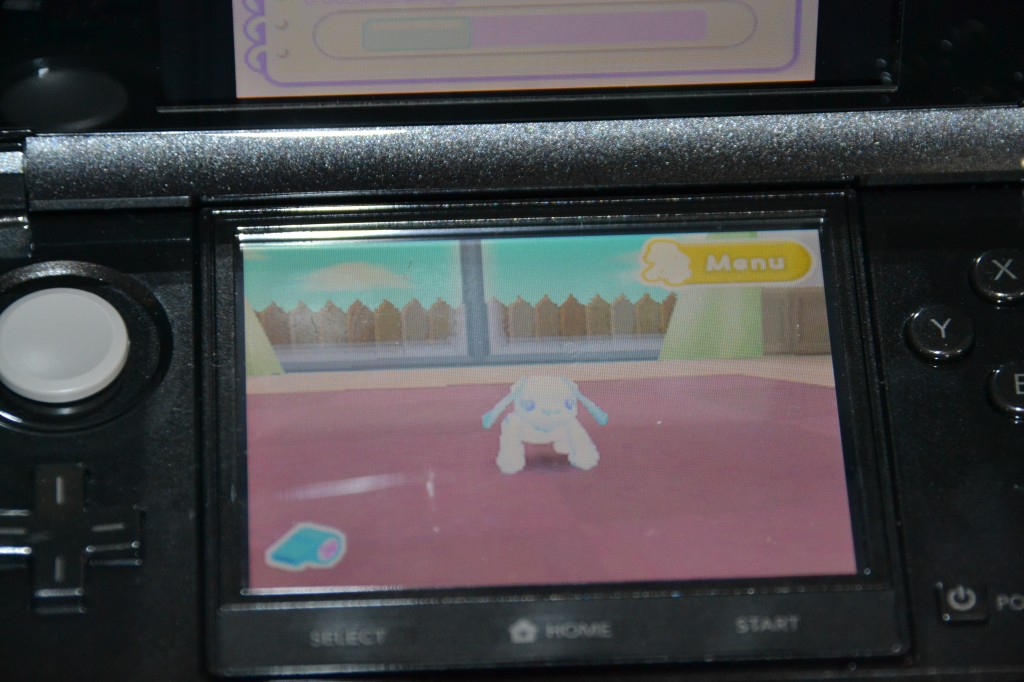 In travel mode, you play with Wappy in the DS. You can move him from room to room, play games, change his appearance and feed him like in Home mode.

We all really enjoyed playing Wappy Dog, and as you play more you unlock more games, rooms and tricks which makes it even more fun. It has also started to teach Z and S a sense of responsibility as they have to remember to look after Wappy daily.

Z and S especially loved playing scissors, paper, stone with Wappy, who they affectionately named ‘Ben’ which has led to much hilarity for us all.

We give Wappy Dog a big thumbs up.

This is more my husbands kind of game, so I’ve handed this review over to him.

So, Angry Birds has come to the Nintendo 3DS.  If you have been living under a rock or are new to mobile devices then Angry Birds is a simple game where you have to pop pigs by catapulting birds of differing abilities at your disposal into the structures the Pigs are hiding in.  The game takes you through the story of why these birds are quite so angry (I didn’t pay a huge amount of attention, but I think the Pigs stole a birds egg or something). 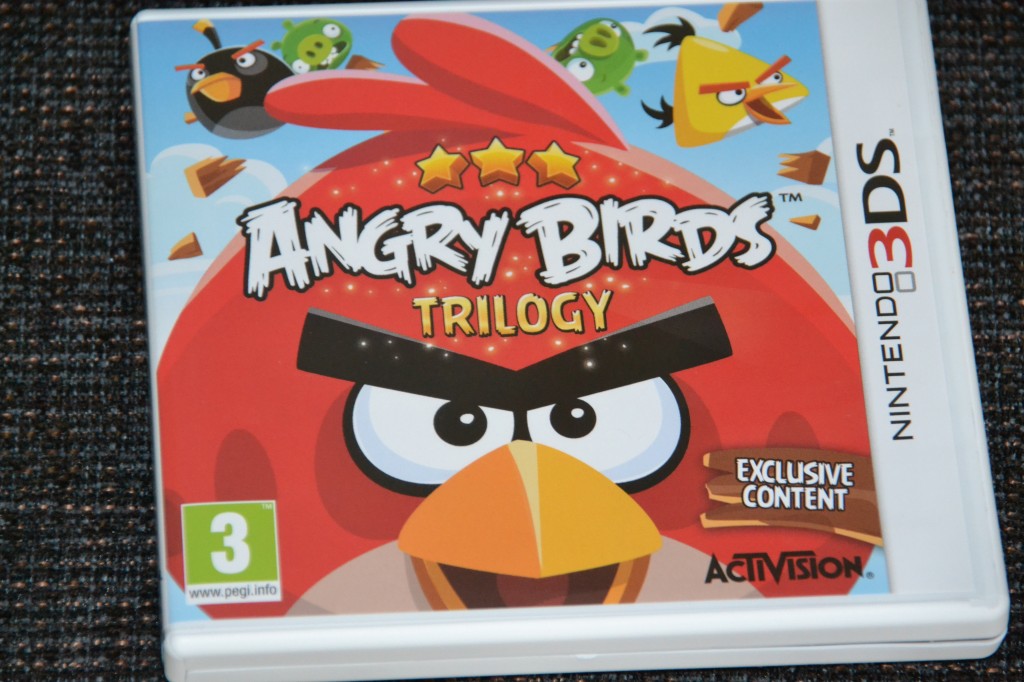 As I mentioned, the idea is to catapult birds into structures that the pigs are hiding in.  They tend to be made of concrete, wood or glass (in a slight update to the big bad wolf legends) and the birds you have can do a range of things.  Some just break things when they hit them, some have additional speed so that during flight you can accelerate them in a particular direction to cause more damage, some split into different birds (like a cluster bird) to spread damage across a wider area.

Despite all of that complexity (read fun), the game play is fantastically simple.  Pull back, aim and let go (i.e. catapult). Repeat until pigs are gone.  Each level is incrementally more difficult than the last and different structures require a different approach.  Without spoiling the fun, the characteristics of some birds lend themselves to certain configurations of the piggies’ hidey holes.

Even within a game level you have a variety of outcomes.  You can simply use up your quota of birds to get all the pigs or you can try to get as many pigs in one go as possible.  The less birds you use the higher points you get and are also awarded extra points for every unused bird.  This is really good for young kids who are often happy to just progress through the levels, it challenges older players when the game ceases to simply be “explode the pigs” to “explode the pigs in one shot”.

So, on all devices the game play of angry birds is utterly addictive.  Whether you like carnage, or problem solving or just have a real grudge against pigs there is something here for you.  What the Nintendo DS brings to the party is 3D game play, dual screen visuals and a choice of touch screen or traditional gamepad button control.

I am on the fence about 3D.  Partially because due to an eye defect I don’t think I experience the full benefit and partially because I’m not convinced of its added value to platform games.  That said…if you’re a fan of 3D then this game allows you to continue that experience

The Dual screen is very good.  I have played Angry Birds on the phone and its often hard to see what you’re trying to hit at the same time as aiming your catapult…the DS solves this problem for you with its twin screens.  You control the bird on the bottom screen and view the carnage on the top at whatever zoom level suits you.

Again, the touch screen is good for phone users who have transitioned to the DS for this game while still allowing standard gamers their gamepad controls.

In all, an already great game enhanced further with no downside by the Nintendo DS.

We were sent a Nintendo 3DS and the games above for the purpose of this review.