We were all doing so well until November hit and my husband, the baby and I have all had awful colds. Not the flu can’t get out of bed type, but seemingly endless snotty, stuffy noses, constant headaches and generally feeling unwell. Somehow the bigger children seem to have remained completely well, which I do think is party down to their healthy diet and exercise. I’m a big fan of not only supplements but also getting lots of nutrients from diet. The children start their day with orange or apple juice alongside their toast or cereal. Did you know just 150ml of orange juice provides all the vitamin C you need for the day?  It doesn’t even have to be fresh, orange juice from concentrate provides the same nutrients and it;s not just Vitamin C, orange juice is also a great source of the B-vitamin folate.

Why do we need vitamin C?

Registered Dietitian Sian Porter says: “Vitamin C contributes to the healthy function of the immune system. A daily 150ml glass of pure orange juice count as one of your five-a-day and contains the vitamin C you need daily.

Conveniently, pure orange juice is also a source of the B-vitamin folate, needed for white blood cells (that protect the body against infectious disease) to rapidly reproduce.”

What other food are immune system boosting?

Sian says: “When it comes to filling your plate, it’s no myth that green is great! Winter greens such as spinach are rich in essential nutrients including iron and served alongside a winter warming bean stew this makes perfect eating for cough and cold season.”

Sian says: “When winter creeps in, it’s tempting to snack on comfort foods like biscuits and chocolate but if you snack on a handful (about 28g) of nuts like almonds, they are a high good source of zinc which contributes to the healthy function of the immune system.”

Sian says: “Like vitamin C, selenium is an important antioxidant that has a role in normal immune function. Mushrooms are a handy winter standby to give meals taste and texture, but they’re also a source of selenium.”

Sian says: “As well the part of our immune system known as ‘innate immunity’, the body also has processes in place called ‘adaptive immunity’ which is when the body recognises a virus it has encountered before and initiates a response. Vitamin A (the body converts beta-carotene into vitamin A) is needed for the development of cells which carry out this response. Adding veg rich in beta-carotene like carrots and red peppers will brighten up your winter dishes and boost your bet-carotene.”

Get ready for Winter

With cold and ‘flu season officially upon us and, in the wake of warnings from the chief executive of NHS England that Britain could face a possible flu epidemic, it’s more important than ever to get your immune system in the best shape to fight whatever might hit it over the coming months.

Remember one of the easiest ways to do this is to eat a wide variety of foods providing enough vitamins and other key nutrients to boost the immune system. I know how tempting it is to reach for coffee and cake on a miserable, cold day, but a handful of nuts and a glass of orange juice instead are much better for you. Although, it is the festive season after all so we all need a few treats, but I for one am going to make sure I eat lots of the foods Sian recommended before, during and after party season. 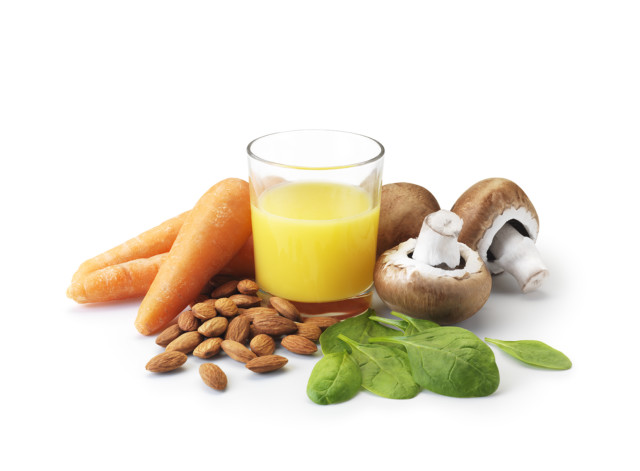 In collaboration with the British Fruit Juice Association