Home » The one with the gymnastics

Our house has gone a bit gymnastics crazy lately. Zak and Sydney have learned to do a backwards kick over which is the funniest and most amazing thing to watch, a back should not bend like that! Zak learned first which brought out Sydney’s competitive side which we don’t see very often, but she was SO determined to get it. She’s also super pleased to now be able to do a backwards roll and into handstand and some pretty awesome round offs.

The girls both had birthdays recently and as we have a house full of toys I really wanted to get them equipment for outdoors. I considered a climbing frame as I thought it would be brilliant for science experiments, but in the end settled on this awesome bar from Wickey. It’s tall enough to challenge my 8 year old, but not so tall they scare me on it. Different sizes are available though for smaller children.

I won’t pretend it was easy to install, but it wasn’t ridiculously hard either. This is what my husband had to say, who was the one doing the hard work!

Fitting the bar was easier than I thought – get a couple of bags of post-mix cement (one for each hole) from your local diy store. Dig two holes to about the depth of the H-anchor. The only thing I would advise here is make them wider than you’d expect, I recommend at least 12” square. Mine are a bit smaller and I think this is why I am getting a bit of wobble on the bar. Measure several times to make sure 1, they are level and 2, they are the correct width apart for your bar. Half fill the hole with water (follow instructions on the post-fix cement), insert the metal stand and then tip in the post-mix. The level should rise to near the top of your hole and become thick enough for your H-anchor to stand on it’s own. Make final adjustments for the level (and the width (on the second insert).

Leave for the requisite amount of time (for the concrete to set) then simply screw your posts into the inserts. 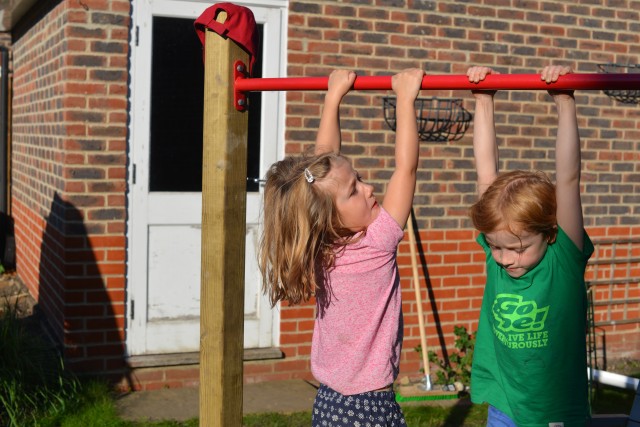 The kids all love the bar and have spent hours practising pull ups, circle ups and other things I just don’t have the upper body strength to even attempt. I did stand under it the other day contemplating a pull up, but I had visions of the kids watching from the windows and laughing at my lack of strength.

It is quite big, but I don’t think too intrusive and our garden isn’t the biggest. We’re really pleased with our gymnastics bar.