I have to admit, Argo is not my usual choice of film. Usually after a stressful day I want to watch something funny or a chick flick. I put Argo on expecting my husband to love it and me to be disinterested. I was wrong. We were both gripped from the beginning. 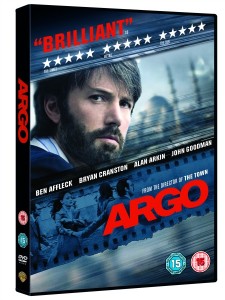 The story revolves around the tensions in Iran in the late 70s when the American Embassy is attacked by an Iranian mob who support the Ayatollah.  Most of the occupants of the embassy were held hostage.  Six however managed to escape into the streets of Tehran and in a very tense escape made it to relative safety in the home of a Canadian diplomat.  However throughout the film the net is closing in on those six and a CIA agent named Mendez played by the Director, Ben Affleck himself formulates a plan to rescue them.

The plan is for the CIA to fund a very plausible but fake movie which will allow Mendez to enter Iran with passports for the escapees and then to tour potential film locations with the very scared team as they go about their business of producing a film.

Again, some parts of the film were amusing and light hearted but throughout there is a building tension which becomes excruciating towards the end.  I particularly liked that the film is understated, it’s no Hollywood action packed gung-ho movie (and it could quite easily have gone down like that and been worse for it), instead it’s a simmering walk through an outlandish plan which as a result seems very plausible.

Argo was a big winner this awards season, picking up this amazing list of gongs:

Argo is also available on Blu-Ray.

We were sent the DVD for the purpose of this review.