Did you know that you can get rear facing car seats for children aged between 9 months and 4 years? and that research has shown rear facing seats are 5 times safer in cases of a frontal collision?

We’ve been trying out a BeSafe rear facing seat for the last couple of weeks, I was a little skeptical about how happy the girls would be facing backwards, but mostly they have been fine. They have a clear view out of the back window and when Z is in the car ( he is in the middle ) he can chat to whoever is facing backwards. The seat itself is very comfortable and well padded.

The Isofix seat is very easy to fit, and there are clear instructions on the side of the chair, or you can use this video from motors.co.uk. We did find the video a little confusing as it wasn’t always clear which instructions were for the Isofix seat and which for seatbelt fix. Two separate videos would have been much better.  Ignoring the confusing content the video was very calmly presented and the camera shots very clear.  If I were fitting with the seatbelt I think it would have complimented the (again very clear) stickers on the chair nicely.

The seat fits into the car using Isofix bars and also has a support stand which sits in the footwell of the car. 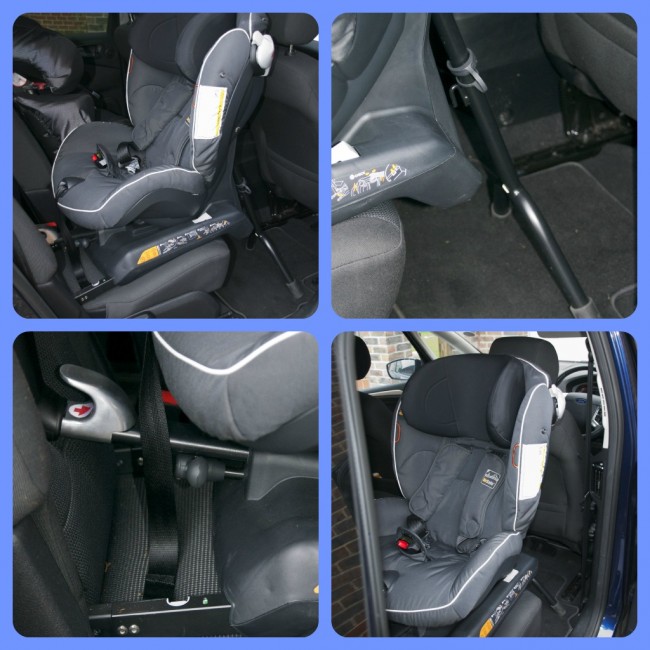 With three children I do find the rear facing seat a bit harder to get the girls into, as they can’t climb in themselves easily and they have to get in and out of the car on that particular side, but thats only a problem when we are parked at school on a busy road.

Sometimes its a little bit awkward that I can’t see the child in the rear facing seat, but they are both old enough for me to talk to them so its not been too much of an issue. Rear facing is definitely an adjustment when you are used to forward facing, but I think if you bought this seat straight after the rear facing baby car seats you wouldn’t think anything of it.

A little bit of inconvenience seems a small price to pay for extra safety. If you are considering a rear facing seat, I would definitely recommend the BeSafe.

Don’t forget to check compatibility with your car when choosing a car seat.

Motors are running a campaign with RoSPA called Rear Facing:Facing the Facts, which is aiming to get the Department of Transport to officially recommend rear facing car seats for children up to the age of four.

Tots100 is supporting this campaign also.

We were sent a BeSafe car seat to review, all words and opinions are my own.