One morning in early December we had a visit from an engineer who came with a Compact Softener 2020c for us to try out. We live in a hard water area, which seems to exascerbate my ezcema and makes our kettle and taps very scaly.

The installation should have been easy, but in our case there was not much room under our sink, so the engineer had to do some clever pipework. He was brilliant though and it only took a few hours.

The compact 2020 looks like a small tower personal computer from the outside, very sleek and doesn’t take up too much space. It works by removing minerals from the water as the water is passed through a resin filter. Within the filter there is a resin which requires recharging using salt. The salt is supplied in the form of large blocks which fit perfectly in the unit. Over time the salt is dissolved and needs to be replaced.

Initially we had the softened water routed to the tap, which we were told was ok, but I think you have to be careful doing this if you have very young children. It did make the water taste  noticibly different, and my children wouldn’t drink it. However, it was very simple for my husband to re route the system (thanks to the engineer provisioning this option for us) so we could drink the hard water again, he was most disappointed that we would still have a scaly kettle though.

This photo shows the salt tablets. 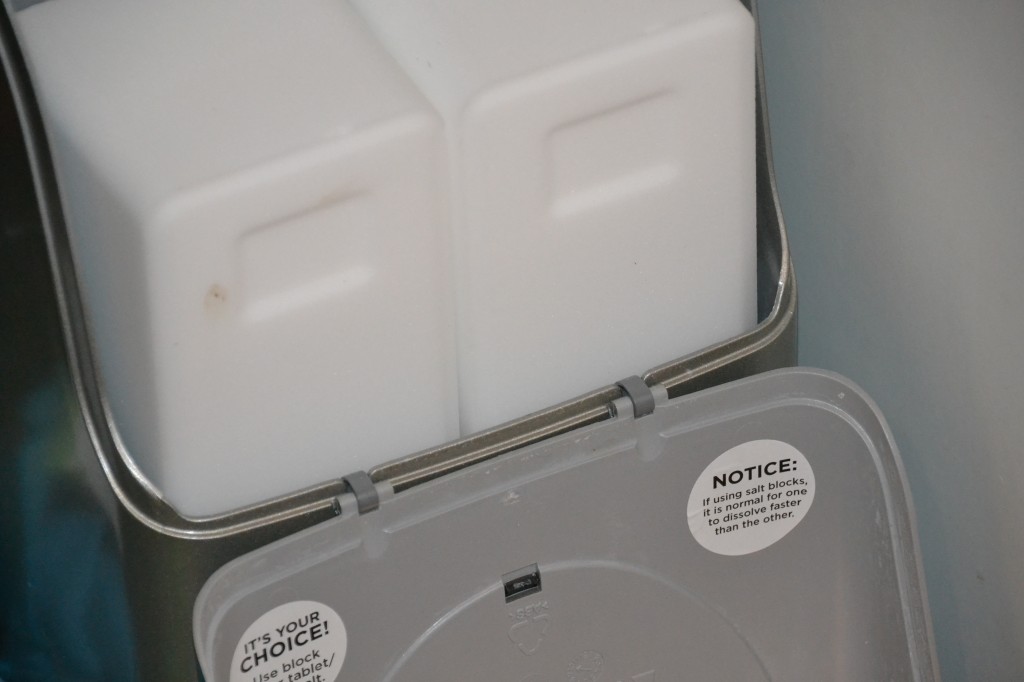 We are nearly three months in to our trial right now and we have seen a number of benefits. We no longer have limescale build up on our taps, shower or iron, all of which required regular descaling before. We therefore assume that our dishwasher, washing machine and boiler will also have reduced build up. The kids bubble bath and soap in general have far more bubbles than they did and they last longer.  It also means you can use less shampoo, bubble bath etc which saves money in the long run.  We’ve also found there to be  much less soap scum after the bath and all the water and bubbles disappear when we empty the bath (they seem to slide out of the bath more easily).  Also the shower door (once my Husband descaled it!) is now see through again and this has persisted while using the softener. Before it would become cloudy and scaly looking very quickly.

These bubbles would have unheard of before, and I only used a tiny amount of washing up liquid.

I have quite bad eczema on my hands, which is exacerbated by the cold weather and frequent hand washing after changing nappies etc. I was quite skeptical that soft water would make much difference but it really has.  In the past I’ve been so concsious of the state of my hands, which would often be covered with cracked and broken skin that I would hide them from people, but now they look so much better. I can wear pretty rings and think they look nice whereas before I thought they were wasted on me. It only took a week for me to notice a difference and even through the very cold snap last month they didn’t crack or bleed once.

Two of my children also have eczema, I’ve noticed that their symptoms have also been much milder and I’ve been using much less cream on the back of Z’s knees.

If you live in a hard water area and have ezcema I would definitely recommend a water softener.

Rather predictably ,the addition of the water softener has removed limescale build up on the visible appliances and surfaces within which we saw so much scale build up.  Living in a very hectic family of 5 means that we just don’t keep on top of that stuff as well as we might, so from a convenience perspective this is absolutely spot on.  The salt seems to last a fair amount of time so I don’t think the cost will be much more than £5 per month or so, which could easily be spent on limescale removers etc.  The biggest bonus for me is not having cracked and bleeding hands in winter.  I might be an extreme case but all of our skin feels softer and in better condition.  The only downside when reading the literature is drinking softened water has a higher sodium count, we are totally unaffected by this as we still have our kitchen cold water faucet supplying us with our drinking water…so yes, the kettle still looks like the entrance to a cave, but we can live with that.

We were loaned the water softener for the purpose of this review.